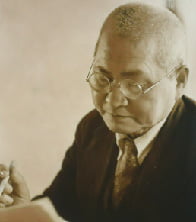 He was born in 1889, in Nanbu town. He was one of the brightest boy in the school so he became a substitute teacher right after he graduated from junior high school. Then, he got the formal teachee's license.

In 1919, he enrolled "Gagakutashu", which was the group of 33 people had varieties of their interests in Tokyo, and began to collect art works. He got many kinds of things.

However, he couldn't afford the equal footing exhanges because he was just a poor teacher from the country side. So he came up with the idea that he woud make the mimeograph of things he was given and put those togher in his private books in reward. He got an unshakable potion in terms of the mimeograpf because it took so much time for people in the group to make it. Later, his art works of the mimeograph caught Takeo Takei's attention and he was invited to "Hashibaminokai", which was the artists's meet-and-greet to exchange their letters, then his art works became very successful.

In November 1995, Yusei Deaino Museum has opened and been desplaying his collections and artworks of the mimeograph.